A new exhibit on Depression glass from the collection of Karleen Daugherty will be on display through May.

At the February 22 general meeting of the Duarte Historical Society & Museum, the membership voted in the slate of officers for the year.  They are: 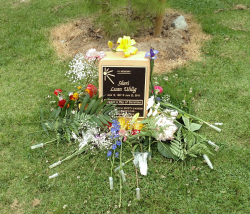 IN HONOR OF SHERI LUAN UHLIG 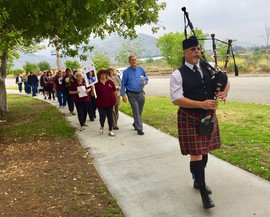 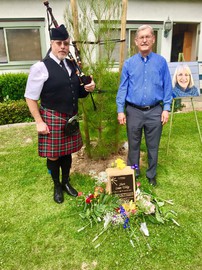 Family and friends of Sheri Uhlig prepare to march down Encanto Parkway to dedicate her memorial plaque.

The Duarte Historical Museum welcomed a visit from the Horseless Carriage Club on Saturday, January 26, 2019.  About 16 of these brass era cars were on display topped off with a pancake breakfast. 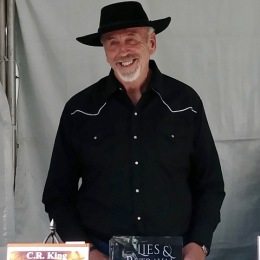 King has worked in the broadcast industry most of his adult life.  Today he has earned the reputation of an expert on gunslingers of the Wild West and has penned several books on the subject. His story of Arthur King and Wyatt Earp (“The Last Deputy”) is based on fact.  He has also authored Battlefield Treasures, Men of War, The Solar Odyssey, Lies & Betrayal, and A Fraternity of Gunslingers: True Stories of Wild West Gunmen.

After outlining the exciting life of Earp, King expects the audience will come to their own conclusions.  Was Earp a man of his time, or purely legend?  Did he enforce the law or break the law?  Regardless of how one interprets the information, he expects the presented snippets of Earp’s actions “will enlighten and give a better understanding to a very real Wyatt Berry Strapp Earp.”

A short business meeting will be held. For further information, call (626) 358-0329.  Admission is free.  Refreshments follow the program.

Check back here regularly to find out what's going on in and round the Rancho de Duarte Community. 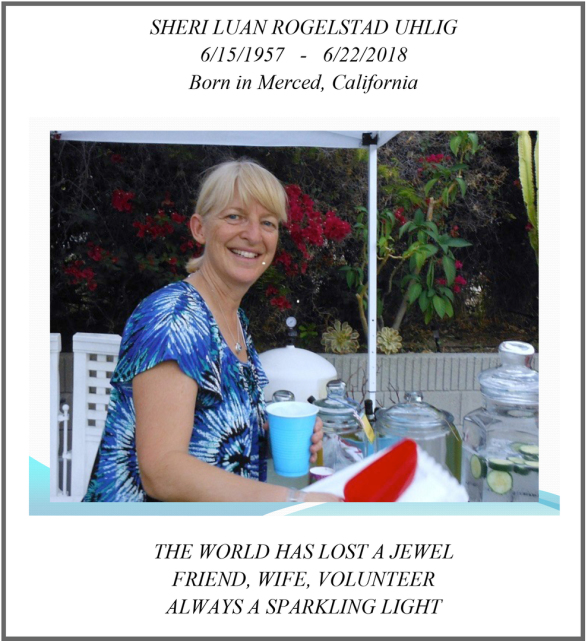 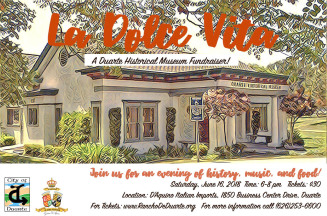 The public is invited to join in the festivities that will take place from 6 p.m. to 8 p.m. at Duarte headquartered D’Aquino’s Importing Company and Italian Cultural Foundation, 1850 Business Center Dr.  Tickets are $30.

Proceeds from the evening will support the Duarte Historical Society & Museum in its mission to upgrade the museum's computer programs to better archive and protect Duarte history and artifacts.

The Duarte Historical Museum, located in Encanto Park, 777 Encanto Parkway, is operated by an all-volunteer staff and is open to the public free of charge.  Exhibits and programs promote local history. Visitors can learn about Duarte's once-thriving citrus industry, the City's namesake Andres Duarte family, and other pioneer Duarteans. Other exhibits include the historic 1938 flood that devastated the San Gabriel Valley and much of southern California, Duarte’s colorful history in tennis, and band leader Glenn Miller, who once owned a ranch in Duarte. Local school children visit every year in conjunction with their local history studies.  The museum library stores dozens of books and videos relating to local history and history in general.

“We encourage the community to support this fundraising event to assure that our museum remains open to the public and continues as a guardian of Duarte’s past,” said Liz Reilly, Duarte Mayor Pro-Tem and event chair.

Claudia Heller, president of the Duarte Historical Society and Museum, said the organization is grateful to the event's host, Gaetano D’Aquino, for providing his company's beautiful headquarters for the gala event.  "Mr. D'Aquino is a dedicated supporter of local non-profit organizations, and has contributed much to the fabric of our community. The City of Duarte recently named a street in his honor. This will be a memorable evening of friendship and camaraderie, one that invokes the spirit of our theme, 'La Dolce Vita,' the sweet life," said Heller.  Tickets may be purchased by clicking here or by calling (626) 253-6600. 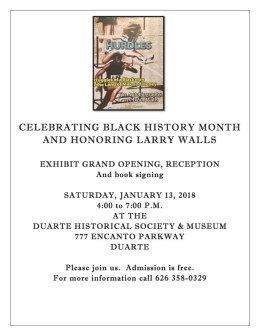 Larry Walls literally fought his way to success.  His childhood in Duarte's Rock Town was rife with bloody noses, black eyes and worse.  While he was often a victim, he was much of the time a perpetrator.  He kept this in mind when he wrote the following in his autobiography:

"Here I am on a hot day in the Compton Superior Court waiting on the jury verdict in a double murder and triple attempted murder trial."  Walls could have been a defendant in the above trial.  But, no, he was the Deputy District Attorney.  How could this happen?

Celebrating Black History Month, the Duarte Historical Museum will honor Walls on January 13, 4-7 p.m. at 777 Encanto Parkway, Duarte.  Walls will talk about life in Duarte during the volatile 1950s through the 1980s and how Duarte moved forward to the town it is today.  He will sign and sell his book entitled Hurdles; Struggles of a Black Man in the Land of Milk and Honey. 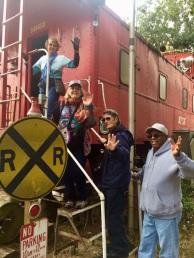 Michael Rubel had a dream, one that members of the Duarte Historical Society recently visited!

He willed his castle located in Glendora to the Glendora Historical Society and tours take visitors to unbelievable sites such as the windmill, a  bottle house, a tree house and box factory.  The tour went through the clock tower, the tractor barn, a sixteen ton bird bath, and a variety of antique cars and trucks.

The castle is nestled behind a rock wall and features nooks and crannies, all hiding treasures galore. 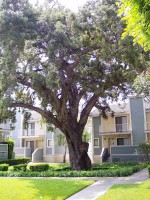 On October 8th, 2014, Duarte lost one of its cherished icons.  In the wee hours of the morning, the beloved “hanging tree” mysteriously collapsed, causing some damage to the surrounding building.  It had been a familiar site on the south side of Huntington Drive just east of Highland where it is rumored to have stood since the 1800s.  Whether fact or myth, its reputation of a “hanging tree” conjured up images of Duarte’s wild west days when it is said circuit judges ordered it to be employed for swift justice.

The tree was witness to the emerging growth of Duarte’s main drag, and saw the rise and fall of the famed Route 66.  It was once surrounded by the old Oakleigh Motel and Motor Court which sprung up to serve Route 66 travelers.  We shall miss its graceful limbs which stood watch for so many years.  Pieces of the tree will be plaqued and on sale at the Duarte Museum starting in March. 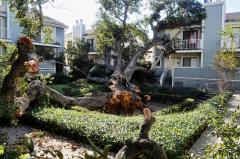 Jim Parrillo, 53, traces his local family roots to the 1950s, only a few seconds in time compared to the roots of Duarte’s so-called “hanging tree” which, after collapsing recently, was sawed up and hauled off before the tear-filled eyes of local residents.

Duarteans first heard of the 50 foot tree’s collapse which occurred about 2:00 a.m. on October 8 when they tuned in to the morning news, recognizing the oak’s familiar branches at first glance. It is said that the tree may have begun its stately watch over what eventually Route 66 more than 200 years ago. Where it got its reputation as a tree employed to execute swift justice during this town’s wild west days is unknown, but widely accepted.

Parrillo covets many memories of local interest, not the least of which is that old tree. Long before the present townhouses were built, the tree graced the Oakleigh Motel, an establishment on Route 66 which reportedly sported a sorted reputation. He recalls looking out at the tree when he and his siblings often ate breakfast there. “It had chains embedded in it and a metal plate which I pictured as where the rope went through when it was a hanging tree,” says Jim.

Jim remembers that the motel rooms were very small and that in the 1970s there was a fire and it was demolished. The tree, however, persevered. He said the myths about that tree were hushed because “there are those who believe that ghosts reside in the branches of old trees.”

Pat Sleeter, Jim’s mother, worked as a nurse at Santa Teresita for forty-four years and was familiar with the Oakleigh Motel because an extended family member managed it for a time in the 1960s. “Although it was just word of mouth,” says Pat, “it was a common belief that this was where justice on the Rancho Duarte was dealt by Circuit Judges.”

Long-time resident Everett Adams recalls that after the motel was gone, there was an establishment near the site called The Crystal Tea Room which sold crystal vases and glassware. He said the Post Office at that time was located on Huntington just east of the tree, and was later moved to its present location.

During WWII, Bruce Staller’s family lived in a rooming house which offered kitchen privileges for breakfast and lunch, but not dinner. Thus, his mom would take Bruce and his brother on the streetcar from Monrovia to Duarte to “eat out.” He recalls a small French restaurant called “The Ives” located just west of the hanging tree. 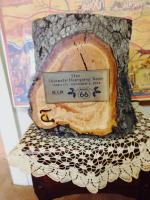 A piece of the hanging tree has been salvaged and will remain on exhibit at the Duarte Historical Museum. “For history-sake, we will display this small chunk of the stately oak as a reminder of Duarte’s wild days during the 1800s,” says Sheri Uhlig, Vice President of the Historical Society. “We’ll miss those graceful branches which stood sentinel over our town for so many years. But now we can visit the salvaged piece and reflect on our history while paying our respects to that old oak.”

Own a small piece of Duarte History. 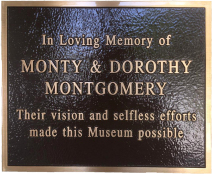